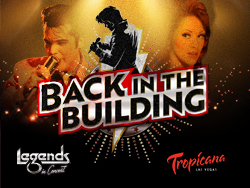 Have a favorite Las Vegas memory? No, weâ€™re not talking about that time you ran naked through the buffet (we havenâ€™t been able to look at mashed potatoes the same). We were actually hoping youâ€™d mention an iconic performer, someone like Freddie Mercury, Elton John, Tina Turner or Cher. Speaking of all-time great singers, Legends in Concert at Tropicana Las Vegas has an all-star lineup of tribute artists set to rip the stage. Legends in Concert isnâ€™t just a â€œtribute show,â€ itâ€™s THE longest running tribute show on the Las Vegas Strip. Like the O.G. artists themselves, Legends takes things up a notch by adding bedazzled costumes, amazing backup dancers, and an over-the-top on-stage orchestra. All of this awesomeness isnâ€™t to take away from the fact that these performers can really sing. These are trained, talented performers and not some fools they pulled out of the local karaoke bar. So, slide on into that tub of nostalgia. The waterâ€™s warm and welcoming. Those bubbles though, those arenâ€™t us. Weâ€™re looking at you, Elvis. Grab your tickets to see Legends in Concert at Tropicana Las Vegas today. Legends in Concert and Tropicana Las Vegas are ready to kick off the season with a first-ever Elvis themed production with â€œBack in the Buildingâ€ at the Legends in Concert Theater. The all-new show highlights the music of Elvis Presley as seen through the eyes of super-fans that became renowned tribute artists. The show will feature not only several of the worldâ€™s greatest tribute artists, but a live band, magnificent costumes, and much more. Fans will celebrate extraordinary Elvis hits performed nightly by rotating Elvis tribute artists including Bill Cherry 2009 Champion (out Dec 16-18) Victor Trevino, Jr. recently crowned winner for 2022, and Daniel Durston. Carol Maccri Gossamer will be featured, paying her legendary tribute to Ann-Margret. While Leo Days swings by Dec 16-18. Please note the show will be dark Tuesdays and December 19 â€“ 25, 2022. Legends in Concert â€“ Back in the Building, Nov 5 â€“ Dec 30, 2022. Featured tribute artist subject to change.

Be the first to review “Legends in Concert” Cancel reply

Steps that can be used on the dance floo...

Women’s Swimwear Cover Up Beach To...