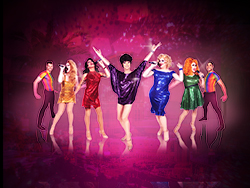 Are you ready for a fun-filled night of giant wigs, death drops, mind-blowing vocals, and lots and lots and LOTS of glitter? If so, then throw on your tallest platform heels and strut on over to Faaabulous! The Show, performing at Notoriety Live! on Fremont Street.Â Â  As the only drag show in Las Vegas where the queens sing live, this one features five powerhouse performers that have graced top-tier stages and won multiple awards all across the country.Â  The creators of this fantastic new production include veteran Zumanity host Christopher Kenney who’s persona Edie spent 13 years emceeing as the “Mistress of Sensuality” as well as performed on Broadway alongside Cyndi Lauper and Alan Cummings, his partner Jamie Morris from the hilarious Puppetry of the Penis show at the Erotic Heritage Museum, and musical director Christopher Lash whose past productions include Baz: Star Crossed Love at the Palazzo and multiple shows for The Wallis Theater in Beverly Hills. This show has everything you love about drag shows with the bonus of mind-blowing four-part harmonies and plenty of killer belts. The song choices range from slow and sexy to upbeat with plenty of attitude. The show starts with a fantastic opening number with all four drag queens before it’s handed off to your MC for the night. She continues the upbeat vibes with a perfectly belted and growled rendition of “Good to Mama” from the Broadway hit “Chicago.” Each queen has their own solo number within the production that’s separated by a variety of duets and group numbers. Our noteworthy favorites include a sequin-studded version of “It’s Raining Men” and a gorgeous tribute to Judy Garland that even brought a few tears to our eyes.Â  Keep in mind this show is absolutely for those with a funny bone that errs on the raunchy side. Within this production, there are parody numbers of songs that have undergone a few rewrites to change “All That Jazz” to “All That Jizz” and “Diamonds Are a Girl’s Best Friend” to “Diapers are a Girl’s Best Friend.” We were gasping at the colorful lyrics and laughing so hard that our sides were splitting. You won’t want to miss the opportunity to experience Faaabulous! The Show on Fremont Street, so grab your tickets today!

Be the first to review “Faaabulous! The Show” Cancel reply

Marvel’s Guardians of the Galaxy C...